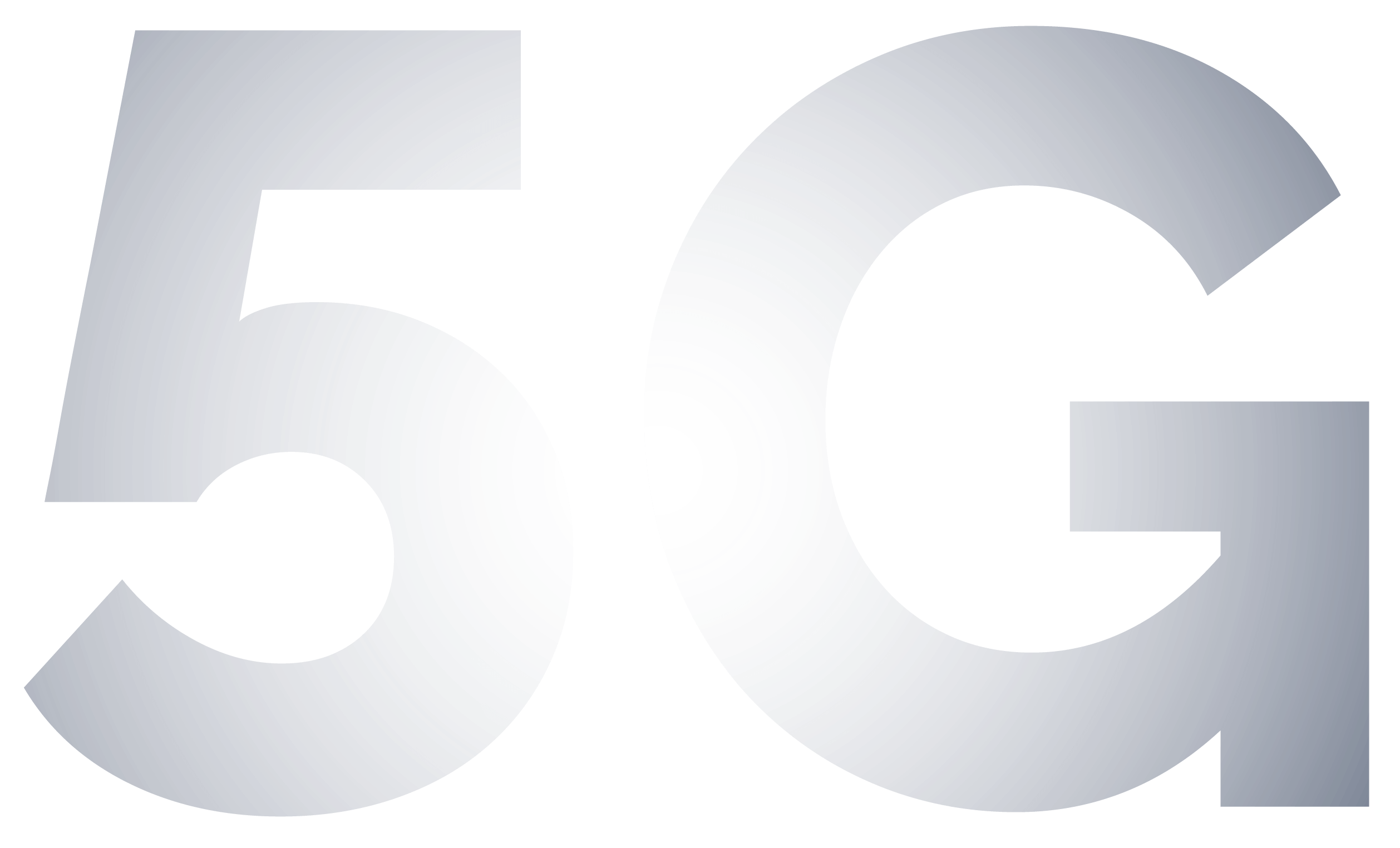 Everything you Need to Know About 5G

The arrival of 5G mobile services is set to transform how businesses operate.
Find out how in our free white paper below.

Chart with the average download speeds for 3G, 4G and 5G

Mobile services are set for a major revolution with the arrival of 5G in the UK. Far more than just a speed boost over existing 3G and 4G technology, 5G network promises to completely transform how consumers and businesses access mobile services.

But what will 5G mean for you in real terms? As one of the newest and most-hyped communications technologies in the UK, there’s still a lot of confusion about what the technology is, where it will be available and what improvements it can offer.

That’s why we’re produced this Free White Paper to help offer some insight into what is 5G and what it can do for you. 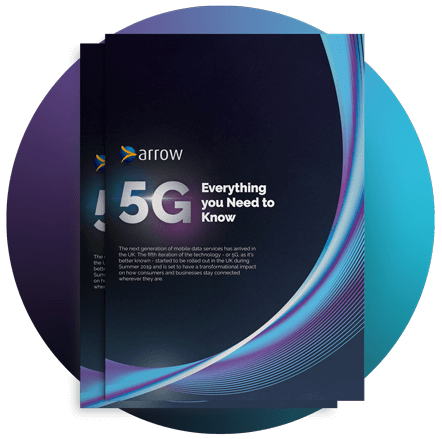 How the 5G Network will Effect Your Business

Understanding what 5G is and what it can offer will be critical for any business’ success in a digital-first, mobile-focused era. Many carriers in the UK have already started offering these services. This technology is set to underpin a wide range of services in the coming years, and will affect everything from video streaming to how autonomous cars communicate with each other.

O2’s 5G network has gone live, with London, Edinburgh, Cardiff and Belfast among the launch cities.

While every sector stands to benefit from 5G to some degree, those where trials have already been taking place and use cases identified include: Manufacturing, Education, Healthcare, Logistics and Utilities.

Contact our expert advisors for more information on how we can help your business:

A new revolution for business mobile services in the UK

As a dual network service provider Arrow has the flexibility to provide unique and comprehensive business mobile phone contracts across the two key networks in the UK: Vodafone and O2.

See the 5G Coverage for O2 and Vodafone.

As 5G is rolled out across the mobile networks, data consumption is expected to increase exponentially, therefore, every organisation needs a mobile security strategy in place to protect their corporate data and the personal data of their employees.

5G: Everything you need to know

The next generation of mobile data services has arrived in the UK. The fifth iteration of the technology – or 5G, as it’s better known – started to be rolled out in the UK during Summer 2019 and is set to have a transformational impact on how consumers and businesses stay connected wherever they are.

Mobile services are an indispensable part of how any firm does business today, and the arrival of 5G will create a huge number of opportunities for improved productivity and new services.

However, while the previous generation was mainly notable for offering a speed increase from 3G, which was comparable to moving from copper internet connections to fibre broadband, 5G is much more than this. 4G offered the ability to download large files and stream video on the morning commute, but 5G could change how we interact with the world forever.

How does 5G compare to existing services?

One of the headline benefits of 5G compared to existing 4G services is the speed increase. Current 4G services typically offer download speeds of around 30Mbps, with a maximum of 100MBps. But 5G, on the other hand, is expected to offer average download speeds of up to 240Mbps, and potentially reach up to 10Gbps in the future without the need for major infrastructure upgrades.[1]

However, the speed improvement is just one of the many upgrades that 5G can offer over 3G and 4G technologies.

When can I get it?

The rollout of 5G is expanding all the time, and all four of the UK’s major mobile network operators – O2, Vodafone, EE and Three – have plans to cover as much of the UK as possible in the coming years. In the earliest days, initial rollouts were restricted to the major cities. Indeed, London, Edinburgh, Cardiff and Belfast were all among the first locations in the country to gain access to commercial 5G networks, but the pace of the deployment is expected to pick up fast.

Efforts are also being made to ensure the technology is not restricted only to urban areas, as was often the case with 4G. Instead, rural areas should become a much bigger focus for 5G in the coming years, with the performance on offer set to make it a viable alternative to the slow fixed-line broadband services that are still prevalent in more remote parts of the UK.

“5G is going to revolutionise the way people and businesses use mobile connectivity, unlocking huge possibilities for our economy and society.”

Many people may view the move from 4G to 5G similarly to the shift from 3G to 4G, but this would be to seriously underestimate the potential power of 5G. Whereas the previous generation offered an evolution in the capabilities of mobile services, what 5G offers is nothing short of a complete revolution in how businesses and consumers interact with the wider world, wherever they are and whatever they want to do.

This may seem optimistic, but 5G has several factors in its favour that make it much more than just another step up in speed. While this will certainly be a major factor for many users, it’s just one of several benefits that businesses stand to enjoy in the coming years.

Initial 5G services are set to be around ten times faster than 4G, but they could potentially offer multi-gigabit speeds in the coming years. This could completely eliminate waiting for downloads, with even the largest files and high-definition streaming available almost instantly.

Reducing latency is another major benefit of 5G. This may not be noticeable to the average consumer watching Netflix on the train, but for many businesses, it is likely to be crucial. With 4G, expected latency can be as high as 70ms, but with 5G, this is reduced to just 1ms.

This could allow firms to run the most important real-time operations such as factory automation using a 5G network, without having to worry about lag affecting the performance of critical applications.

One of the biggest problems with current 4G services is the slowdown when multiple users want to connect at once – as anyone who’s tried to access it at a concert or sports event will know. But 5G offers much greater bandwidth that allows hundreds, if not thousands, of simultaneous connections with no impact on speed – something that will be vital as more devices come to depend on mobile connectivity in the future.

Business users can also take advantage of the flexibility of 5G with techniques such as network slicing. This allows users to carve out a private virtual network within their infrastructure to ensure that specialised, mission-critical functions have their own dedicated network that offers greater control and customisation to meet specific needs.

The results of this could be huge. For instance, one analysis by Barclays from 2019 estimated that by 2025, the use of 5G could increase revenues for UK businesses by as much as £15.7 billion a year, while by 2030, it may boost the overall economy by more than 1.5 per cent.[3]

The possibilities for 5G could be endless. But it’s still early days for the technology, so it could be the case that the most transformative solutions for this connectivity are something we haven’t even yet imagined.

While it’s possible to simply use 5G networks as a faster, more reliable mobile data option, this will not make the best use of the technology. Instead, the main case for 5G will be how it opens up a wide range of new innovations and solutions businesses can use to transform how they operate.

The next stage of the Internet of Things

The Internet of Things, or IoT, has been one of the most-hyped tech innovations of the last few years. Essentially covering any internet-connected devices that have a specific task – from smart speakers and home assistants to environmental sensors and connected cars, these gadgets will be gathering huge amounts of data in the coming years. Some forecasts suggest there may be as many as 41.6 billion IoT devices in use by 2025, generating almost 80 zettabytes of data a year

With many of these transmitting this data via mobile networks, 5G will likely be the only solution to ensure these solutions can work effectively in such crowded environments. This connectivity will therefore enable many new applications for IoT.

For instance, it allows for instantaneous machine-to-machine communications in factories and warehousing, to keep everything running smoothly and anticipate problems before they happen. Or it can ensure the next generation of connected, autonomous vehicles are safer by enabling them to communicate with each other on the roads.

One technology that is expected to be in high demand in the coming years is augmented reality (AR) and full virtual reality (VR). Until now, these have mostly been restricted to fixed connections because real-time streaming in 360 degrees is too data-intensive for existing mobile networks.

5G removes this barrier. On the consumer side, this could open up a new generation of entertainment, such as full 360-degree streaming of sports or concerts. But it has a wide range of other uses, from education and training to providing hands-free information to factory floor workers. It could even be used to hold virtual meetings as a more immersive alternative to traditional teleconferencing.

Another use for 5G will be in supporting, or even replacing, traditional fixed-line broadband networks. In many cases, the speed, latency and reliability offered by 5G may exceed what’s currently available with the most commonly available ADSL and fibre broadband technologies, which offer average download speeds of around 11Mbps and 36Mbps respectively.

It could be especially useful for businesses in areas where the fastest full-fibre broadband does not yet reach. In these locations, a 5G router can be installed to effectively provide Wi-Fi coverage to users that can offer a much faster service than would be possible with fixed-line broadband, and would be significantly cheaper and faster than deploying new cabling infrastructure.

Elsewhere, 5G could also be invaluable for locations such as construction sites and other non-permanent projects, as it would be far easier to install than other temporary solutions, as well as offering much greater flexibility and speed than 4G or satellite-based solutions.

£91 million saved through the adoption of smart LED street lighting

5G is about much more than just faster data services on your smartphone – it’s the key to everything enterprises will do in the coming years. Therefore, it’s essential that you get a head-start on this technology and look for an experienced communications provider to help you navigate the rollout and identify how it can help your business.

Contact Arrow Business Communications today on 0330 440 4444 or [email protected] to find out more about your options for migrating services away from ISDN systems.